The way the ankle is designed, its primary movement is dorsi and plantar flexion (up and down), while it is subtalar joint which produces eversion and inversion movements (turning foot in and out). 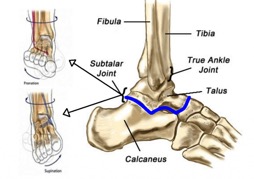 The Medial Ligament, or the Deltoid ligament is a strong, flat and triangular band which consist of four ligaments and fans out from the medial malleolus to the talus, calcaneus and navicular bones. The primary action of this ligament is to resist over-eversion of the foot or rolling the foot inwards. This particular type of rolling motion which may cause an ankle sprain is rare and is normally associated with a fibula fracture known as a Pott’s fracture. 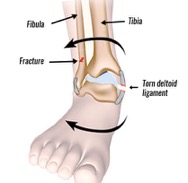 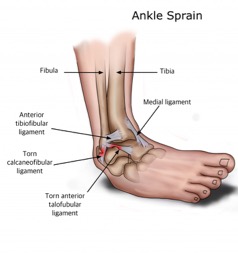 So how do we treat a sprained ankle?

If no break is suspected, the first goal of treatment is to assist in getting the swelling down while keeping as much range of motion throughout the foot and ankle bones. Rehabilitation is extremely important with a ankle sprain and vital for getting the person back to their sport or daily task. We would start off with some advice which would include rest, ice, compression and elevation (RICE). Then followed by basic ankle and foot range of motion exercises such as the ABC’s (which is just moving the foot to the letters of the alphabet).

Once the person’s pain and swelling has decreased and their range of motion is better, we can start to add in some harder exercises like balance exercises, theraband ankle work and increasing their range of motion exercises. The very last step is to make the persons rehab a little more sport specific to them, such as hopping, jumping and changing directions. Whether it is basketball, running or just getting back to playing with the kids.