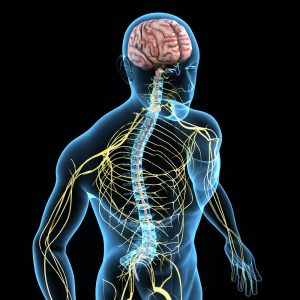 Have you ever wondered what makes our bodies do what they do? Why we move, talk, breathe and everything in between? Well, there is one system of the body that is primarily responsible for driving all those things… your nervous system.

What is the nervous system?

The nervous system is a complex collection of nerves and other nerve tissues that intertwine and interact with all the other 10 systems of the body. Even though it is found throughout the whole body, it equates to less than 5% of the total body mass, making it one of the smallest systems of the body. This is hard to get your head around when you consider there are billions of nerve cells (aka ‘neurons’) that make up the system. It’s mind-boggling stuff!

The nervous system is made up of two main parts:

The PNS is made up of all the other nervous tissues that sit outside of the CNS. The nerves that travel from the brain (i.e. cranial nerves – of which there are 12 pairs) and spinal cord (i.e. spinal nerves – of which there are 31 pairs) to the rest of the body and back again make up a large part of the PNS. There are also various other types of nervous tissue that form this system.

The PNS is further broken down into the following parts:

All the above subdivisions of the PNS have a sensory part which transmits information to the brain and spinal cord, and a motor part which transmits information to the body to drive an action. For example, the motor part of the SNS drives contraction of our skeletal muscles allowing our bodies to move. Whereas the motor part of the ANS drives contraction of smooth muscle (found in the arteries and the gut) and cardiac muscle (our heart muscle). The main difference being, the SNS works on a voluntary basis as mentioned above (i.e. we choose to move our arm), and the ANS works on an involuntary basis… it is automatic (or autonomic, hence the name) and all actions occur without us choosing or even really knowing about it (i.e. our heart beating). Cool, huh?!

Functions of the nervous system

OK, so we’ve just thrown A LOT of info at you, but hopefully you are starting to see how the nervous system is made up and what jobs it is responsible for. The main overriding job of this system is to control the internal conditions of the body so it can function correctly. We move, we talk, we breathe… and everything in between!

If you’re a visual person and need to see or read a real-life example, then think of the nervous system as working like this:

So just remember… sensory, processing and motor, and you have the basic functions of the nervous system under wraps!

Interested in learning more about the body? It’s fascinating! If you are keen to learn more about what we do, or even move into the field of osteopathy, please do come and chew our ears off next time you are in. Our fantastic profession is always on the lookout for new talent. And you get to spend your life learning about all the cool things the human body can do, as well as helping people reach their full potential! What’s there not to love!